I know that I am

the reason for the change to the "holiday dress code memo" this year. It not specifically says "Christmas" clothing, instead of "holiday" clothing.

It used to read "holiday themed clothing", and yes, I did write it that way on purpose. No, not so I could wear a skeleton scarf on Christmas Eve (that was an added bonus), I wrote it that way as to not offend anyone who is of a non-christian faith or does not celebrate at all. I purposely did not use the word "Christmas" because I am allergic to lawyers :) 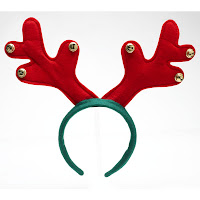 Anyway, big surprise that the frog queen does not own or ever plans to own a holiday sweater, so I just wear a Santa hat or antlers or something - paired with a Halloween item. For no other reason than I like Halloween and Christmas and I have a sense of humor. :D

Something that I think HR finds an absence of in an employee to be a necessity :D

So, I have this skull scarf that I wear all the time (not just Christmas eve) and it appears that wearing it outside of "Halloween" is offensive to some people I work with. They reported it to HR....who now has to be more clear in their communication to staff, because of me. :)

For the record, the HR department used to be next to marketing and we are good friends. I help organize most of the staff parties and events, I decorate, create the flyers and awards, they love me. They thought it was silly, but they are also afraid of lawyers so . . . . . . .memos have to be edited.

And if she did not like my skull scarf, then she would really hate my skull hat with holly on it....I thought about wearing it today......I had it in my hand this morning as I was walking out the door....at the last minute, I put it back in the box. (That was close!)

As for the gingerbread house. I told the department if they wanted me to make it, it was going to be "haunted"......I think they were even a bit, ah.....shall we say surprised. Guess I don't have to make one next year! :D 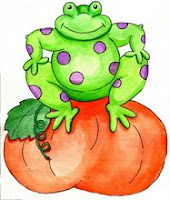 Frog on the Pumpkin
Posted by Chris 'Frog Queen' Davis at 10:59 AM

Home is where the haunt is